For the fifth year running, Grand Hotel Excelsior team members will be organising a Santa’s Swim. Colleagues, guests and members of the public are invited to swim in the clear, chilly waters of Marsamxett Harbour or make a splash in the hotel’s swimming pool. The event will take place on Saturday 3rd December 2016 and all donations will be in aid of the Malta Community Chest Fund.

Each swimmer will receive a Santa hat upon registration. We will be serving well-deserved warm drinks and home-made cookies to all participants after the swim. Facilities for showering and changing will be available. A certificate of participation will be presented to all swimmers. Those who are not willing to brave the cold water are still encouraged to come and show their support.

Once again, present and former local Waterpolo players are being invited to participate in an exhibition match. At 9.45am the MCCF representatives will start collecting the donations and registering the participants. The band of the Malta Police Force will bring joy with live Christmas music and will be welcoming the participants at the Grand Hotel Excelsior lobby at 10am. This activity is being endorsed by the Malta Community Chest Fund and H.E President Marie Louise Coleiro Preca is expected to attend.

The American Autoclub MALTA will be supporting the event by organising a static show in the Yacht Club area. Each participant is kindly asked to make a donation of €10 upon registration in aid of the Malta Community Chest Fund. Those participating will also be in the chance of winning a Dining Voucher for Two. T&C Apply. Participants are encouraged to register for this charity event by contacting the Grand Hotel Excelsior Christmas Desk on 21250520 or email christmasdesk@excelsior.com.mt Holidays should be about exploring new and unknown, perhaps even typical for the country visited. If you plan to visit Valletta have a look at our list of recommendations. 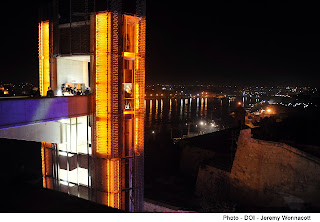 History of Malta
Macartney, McElroy & Co. Ltd., an engineering company specializing in electric tramway systems, constructed the Upper Barrakka Gardens lift, which opened in September 1905.
Macartney, McElroy & Co. Ltd. also laid down tramlines in Malta in 1904. The tramlines linked the Three Cities and Rabat to Valletta, via Floriana, Hamrun, Birkirkara, Attard and Zebbug.
John Francis Macartney died on the 15th February 1913, aged 44 years. He had been the principal shareholder and managing director of Macartney, McElroy & Co. Ltd. This company designed and constructed the Malta Electric Tramway system in 1904, followed by the Barrakka Electric Lift. Upon his death, the management of the company passed to his son J.F. Macartney. Apart from Malta, the company ran tramways in more than twenty British cities, as well as North and South America and South Africa. 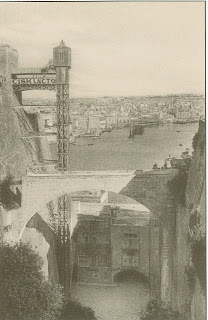 Opened to the public in September 1905, at a cost of £5,000, the Barrakka lift connected Lascaris Wharf (Old Customs House) with Upper Barrakka Gardens offering a shorter and quicker route.
The lift incorporated two cabins each capable of carrying 12 passengers. It rose through 75 tonnes of steelwork vertically 167feet 7inches, with the winding gear housed in a turret even higher at 197feet (60m), to a lateral bridge, extending some 23feet out from the bastion gardens.
Other than a shutdown from October 1917 to June 1919, due to unavailability of spares and coal to generate electricity, the lift would see daily use until 9pm on 2nd February 1973. However, following the
privatisation of the dockyard in 1958 along with the withdrawal of British servicemen in the 1960s, its main source of income, revenue, was insufficient to meet the wages of the six employees and the closure became inevitable.
Malta Attractions
Efforts by the Government to find a company to run yet another Maltese unique and historic transport system were unsuccessful and after lying idle for ten years the lift was dismantled in August 1983. In March 2009 the government submitted a planning application for the construction of the lift. The full development permit was granted in September 2010. The €2.5 million project, mostly funded by the EU, brings back a century-old link between Valletta and Grand Harbour.
The 58m high lift has two passenger cabins with a total capacity of 21 passengers and is able to carry up to 800 people per hour. Its concrete structure is covered with a honey-coloured aluminium mesh to blend in with the fortifications which have been restored.
In order to safeguard the newly-restored bastions, the lift is freestanding so as not to damage the fortifications.

For more information on Things to do in Malta during your holidays contact the dedicated team at one of the Luxury Malta Hotels and they will assist you in having enjoyable short breaks in Malta.