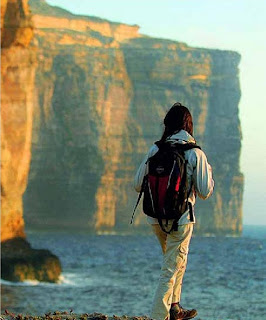 Malta’s central position in the Mediterranean has made the Island a hub of history – from the landing of St Paul; through the times of the Knights of St John; to the modern epic of Gallant Malta.
A cultural mix makes Malta unique. Its language is based on Arabic, but English is widely spoken. There is a rich variety of country walking allowing visitors and locals alike to explore the Maltese Islands’ landscape of small ridges and valleys, seamed by tracks among stone walls and little farmsteads as well as lovely panoramic coastal paths. There are a number of attractive country walks in Malta. The ideal period for walks is autumn to spring as the weather would not be as hot and the countryside turns into a green paradise with blossoming wild flowers.
Gozo is greener, without the bustle of large towns. With some great walking across irrigated farmland, steep valleys, terraced fields and table-top hills, there is no better way of discovering the best the island has to offer. Through walking tours you may explore the hidden and secluded areas around the island and discover stunning views and hidden valleys. You may come across wayside chapels and old forts as well as villages that have remained practically untouched where elderly men and women still work the fields. There are also many historical and archaeological sites with breathtaking views.
If you are planning your next Malta holidays the Chauffuer Driven Service at this superior Malta Hotel can assist you with your Malta Walking Tours. 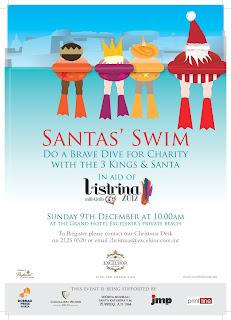 Spot Santa and The Three Kings doing a brave dive for charity at the Grand Hotel Excelsior!! Come and join us on Sunday 9th December 2012 at 10.00 hrs! Take a dip just off our private beach and give a donation for charity – All for a Very Good Cause.
For more information about Festive Season Events at the Grand Hotel Excelsior Malta kindly contact us on christmas@excelsior.com.mt or on 00356 21250520. 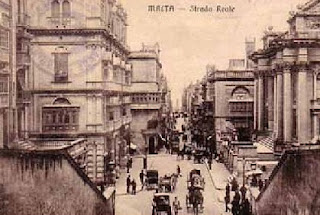 Valletta – a fortified city
Valletta owes its existence to the Knights of St John, who planned the city as a refuge to care for injured soldiers and pilgrims during the Crusades in the 16th century. Until the arrival of the Knights, Mount Sceberras, on which Valletta stands, lying between two natural harbours, was an arid tongue of land. No building stood on its bare rocks except for a small watch tower, called St Elmo, at its extreme end. Grand Master La Valette, the gallant hero of the Great Siege of 1565, soon realised that if the Order was to maintain its hold on Malta, it had to provide adequate defences. Therefore, he drew up a plan for a new fortified city on the Sceberras peninsula. Pope Pius V and Philip II of Spain showed interest in the project. They both promised financial aid and the Pope lent the Knights the services of Francesco Laparelli, a military engineer, who drew up the necessary plans for the new city and its defences. Work started in earnest in March 1566 – first on the bastions and, soon after, on the more important buildings. The new city was to be called Valletta in honour of La Valette. The Grand Master didn’t live to see its completion and he died in 1568. His successor, Pietro del Monte continued with the work at the same pace. By 1571, the Knights transferred their quarters from Vittoriosa (Birgu) to their new capital. Architect Laparelli left Malta in 1570. He was replaced by his assistant Gerolamo Cassar, who had spent some months in Rome, where he had observed the new style of buildings in the Italian city. Cassar designed and supervised most of the early buildings, including the Sacra Infermeria, St John’s Church, the Magisterial Palace and the seven Auberges, or Inns of Residence of the Knights.
By the 16th century, Valletta had grown into a sizeable city and people from all parts of the island flocked to live within its safe fortifications especially as Mdina, until then Malta’s capital, lost much of its lure. In the ensuing years, the serious mannerist style of Cassar’s structures gave way to the more lavish palaces and churches with graceful facades and rich sculptural motifs that we see today. The new city, with its strong bastions and deep moats, became a fortification of great strategic importance. Valletta’s street plan is unique and planned with its defence in mind. Based on a more or less uniform grid, some of the streets fall steeply as you get closer to the tip of the peninsula. The stairs in some of the streets do not conform to normal dimensions since they were constructed in a way so as to allow knights in heavy armour to be able to climb the steps.

Fast forward a few centuries and the city built by gentlemen for gentlemen came under another siege; this time in the shape of World War II which brought havoc to Malta. Valletta was badly battered by the bombing, but the city withstood the terrible blow and, within a few years, it rose again. During the postwar years, Valletta lost many of its citizens who moved out to more modern houses in other localities and its population dwindled to 9,000 inhabitants. However, in the last few years many individuals with a flair for unique architecture are trickling back into the city and investing in old properties.
Valletta, the smallest capital of the European Union, is now the island’s major commercial and financial centre and is visited daily by throngs of tourists eager to experience the city’s rich history.
Valletta Attractions
Despite measuring just 900 metres by 630 metres, Valletta boasts over 25 churches, a testament to the centuries-old ingrained Catholic faith of the Maltese. In fact, the first building that went up in the city is the church of Our Lady of Victories along South Street, which commemorates the lifting of the Great Siege. The Co-Cathedral of St John is nothing short of a gem and quite simply a must for any tourist. Described as the first complete example of high Baroque anywhere, it epitomises the spiritual and military role of its patrons. The Cathedral is a showcase to Mattia Preti who intricately carved stone wall designs, as well as the painted vaulted ceiling and side altars with scenes from the life of St John. Among the treasures found in the Cathedral are the unique Caravaggio painting depicting the beheading of St John, the extraordinary paving of more than 300 marble tomb slabs (the burial place of several former European princes), and the splendid vaulted central nave with frescoes of Mattia Preti.
If you’re looking for enjoyable Malta City Breaks, then stay in one of the leading Malta Hotels close to Valletta with its superb attractions, museums, restaurants and shops.