Another Event by the Grand Hotel Excelsior Malta – A Halloween Dinner Party on the 27th October 2012.
Witches brew will be served to our enchanting guests between 19.00 and 20.00 in our ghoulish lobby followed by our enthralling buffet. Enjoy bewtiching views and an eerie atmosphere in our own flying dutchman.
A prize will be given to the person with the spookiest costume.
DJ Jean Pierre will spook the haunted ship.
Click Here to View Halloween Menu

Gremlins aged under 6 are free when accompanied by two scary adults.

If you wish to place a dinner booking for Halloween at the Grand Hotel Excelsior Malta call 21250520 or email events@excelsior.com.mt. 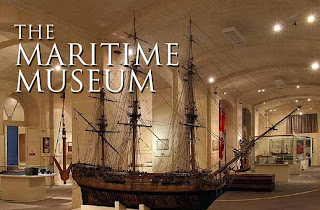 Malta Maritime History
The Maritime Museum charts Malta’s maritime history within a Mediterranean context and also illustrates the global nature of seafaring and its impact on society. The Museum is situated within the former British Naval Bakery in Vittoriosa. The building was erected between 1842 and 1845 on the site of the old covered slipway of the Knights of St John.
The bakery was the hub of the Victualling Yard and supplied the Royal Navy with its daily requirements of bread and biscuits. After World War II it was converted into offices and stores and as the headquarters of the Admiralty Constabulary. The building remained part of the naval establishment up to the closure of the British base in 1979. 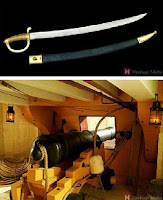 At the entrance of the Museum, one may view the ‘Anadrian Hall’ which exhibits the engine room machinery of the Anadrian, which was a steam- driven grab dredger built in 1951 for Malta. The first floor houses a display on the Merchant Navy and exhibits a collection of detailed ship replicas and paintings illustrating 19th and 20th century vessels most of which served on the Malta run. The nearby St Angelo Hall, the museum’s events and lecture room, is decorated with an array of colourful ship badges.
Organised into thematic and chronological sectors, the Main Hall illustrates developments from ancient times to the end of the rule of the Order of St John in Malta. Navigational charts, nautical instruments and a series of portraits set the scene for the navy of the Order of St John. This display includes paintings, weapons, uniforms, anchors, maps, models and other artefacts dating from 1530 to 1798. An entire room is dedicated to traditional Maltese sea crafts and other objects that indicate popular traditions and Malta’s long-standing maritime vocation. In the Customs Hall there is a variety of standard weights and measures and other objects, including the uniform of an inspector of Marine Police, which bear witness to the importance of Malta’s historic links with maritime commerce and traffic.
For almost two hundred years, Malta was the home of the British Mediterranean fleet. The Royal Navy kept a vast establishment on the Maltese Islands. The final hall presents an overview of Malta as a naval base, and depicts aspects of naval and civilian life, both leisure and work. There is also a wide collection of paintings, photographs, models, uniforms, weapons, instruments and other artefacts that illustrate the history of the Royal Navy in the Mediterranean during the 19th and 20th centuries and attest to the Navy’s impact on the economy and social life on the Maltese islands.
Should you wish to visit the Malta Maritime Museum during your holidays kindly contact the transport desk at this Luxury Malta Hotel on transport@excelsior.com.mt. Alternatively you may wish to experience one of our unique Malta Tours. 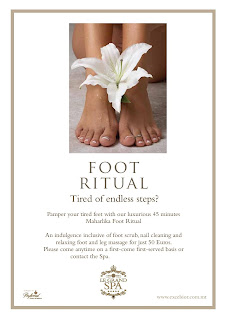 Pamper your tired feet with our luxurious 45 minutes Maharlika Foot Ritual at Le Grand Spa Malta.
An indulgence inclusive of foot scrub, nail cleaning and relaxing foot and leg massage for just 50 Euro.
Guests are welcome anytime on a first come first served basis or by contacting Our Luxury Malta Spa on 2319 2115.