A Glimpse of Our Presidential Suite…

A Suite fit for Royalty! Located on the 10th floor this Luxurious Suite consists of two spacious bedrooms with king sized beds, two lavish bathrooms and a large terrace with sun beds and outdoor furniture. The Presidential Suite offers a 180-degree breathtaking sea view of Marsamxett Harbour and Manoel Island. Ideally located in a corner this Spacious Suite also has a well lit living room and a dining room with an adjoining separate toilet and a separate balcony. It’s like travelling with the comforts of your home.
Should you wish to check availability and Book Online this Luxury Malta Accommodation kindly visit this Top Malta Hotel‘s Website at www.excelsior.com.mt.

Chinese Spring Festival Performance Resplendent in MCC – 18th February 2011.
A marvellous and resplendent presentation by a group of 23 Chinese artists from Heilongjiang Province added spark to the 2011 Valletta Spring Festival and received a standing ovation from the audiences on January 31, 2011 at the Mediterranean Conference Centre.
A combination of graceful classical dance, ebullient folk dance, upbeat and melodious Chinese music, as well as original and humorous magic exhibited the crème of the traditional Chinese cultural and the arts. Extracts such as Ernani, Ernani Involami and Nessun Dorma from renowned Italian operas struck a deep chord with the audience.
Guests of honour present at the evening were H.E. Dr. Ugo Mifsud Bonnici, President Emeritus of Malta, H.E. Dr. Edward Fenech Adami, President Emeritus of Malta, Dr. Alexiei Dingli, Mayor of Valletta, H.E. Mr. Zhang Keyuan, Chinese Ambassador to Malta, Ms. Wang Zhenzhen, Deputy General Director of Heilongjiang Provincial Bureau of Culture, Mr. Gu Hongxing, Director of China Cultural Centre and heads of diplomatic missions in Malta. Congratulations and thanks were given to the artists and the organizers when the guests of honour received the cast after the show.

The 5th edition of the Valletta Chinese Spring Festival was jointly organised by China Cultural Centre and the Valletta Local Council under the patronage of the Parliamentary Secretariat of Tourism, the Environment and Culture, and the Chinese Embassy in Malta. The Malta Tourism Authority, the Mediterranean Conference Centre and the Grand Hotel Excelsior have also rendered great support to the events.
Apart from the evening show, the series of events of the Festival also included the charity fair of Chinese handicrafts on January 26 at the China Cultural Centre, with all the earnings donated to the Malta Community Chest Fund; the opening performance on January 30 at the St. George’s Square and street parade; the Chinese New Year Dinner and fireworks display on February 2 at the Grand Hotel Excelsior, as well as the ongoing photographic exhibition entitled Malta through Chinese Eyes, on display between January 25 and March 3 at Auberge d’ Italie.
View Original Article: http://www.fmprc.gov.cn/eng/wjb/zwjg/zwbd/t800412.htm 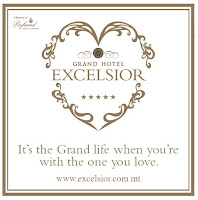 “Love is just a word until someone comes along and gives it meaning.”
Show the special person in your life what he or she means to you with a grand gesture. Spend a weekend in opulent surroundings or a night of delectable dining or both. The choice is yours.
The Grand Hotel Excelsior has put together an intriguing two night package for this special occasion. Check in to a deluxe room to find a chilled bottle of sparkling wine and petit fours waiting for you. Wake up to a never ending array of food at breakfast every morning. On Valentine’s evening, feast on a lush spread of food in the hotel’s main restaurant. This package is valid for two nights between the 13th and 16th February 2011 at the very affordable price of 449 Euros per couple sharing inclusive of taxes. Should you opt for the dinner alone, the price is 60 Euros including a half bottle of wine, water and coffee.
BOOK YOUR ROMANTIC VALENTINE BREAK NOW
For more information and to book this Valentine Accommodation Package please visit the hotel’s website http://www.excelsior.com.mt/ or call the Reservations Team on 00356 21 250 520 for additional offers.
If you would like to opt just for the Valentine’s Dinner on the 14th February 2011, please contact the Hotel’s Food and Beverage Team also on 00356 21 250 520 or by email on: food.beverage@excelsior.com.mt
The team at the Grand Hotel Excelsior looks forward to hosting you!
﻿