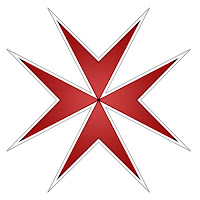 Introduced to Malta by the Knights of St. John of Jerusalem upon taking possession of the islands in 1530, the Maltese Cross has become an intrinsic part of Malta’s culture and heritage, as well as a much-cherished symbol by the Maltese.
The Maltese Cross formally adopted by the Knights Hospitallers of St. John in 1126, stylistically owes its origins to the crosses used in the crusades, when it was identified as the symbol of the “Christian warrior”: Its eight points denote the eight obligations or aspirations of the knights, namely “to live in truth, have faith, repent one’s sins, give proof of humility, love justice, be merciful, be sincere and wholehearted, and to endure persecution”. With time, the eight points also came to represent the eight “langues” (literally “tongues”, but in effect national groupings) of the noblemen who were admitted to the famed order, namely those of Auvergne, Provence, France, Aragon, Castille and Portugal, Italy, Baviere (Germany), and England (with Scotland and Ireland). The Maltese cross remains the symbol of the Sovereign Military Order of Malta.
The link between the Maltese Cross and these islands was forged with the Knights’ arrival in Malta in 1530. By then, the Cross had become the established symbol of the Order, and as the Knights set about putting their stamp on these islands through their inspired architectural feats and patronage of the arts, so the Maltese Cross provided the signature to this glorious legacy. The Cross found itself on coats-of-arms, palaces, hospitals, the entrances and gates to various forts and towers, on fortifications as well as on coins, cannon, monuments, churches, paintings and frescoes, furniture, silverware and jewelry.
A selection of souvenirs including thimbles, magnets, baseball caps, lighters and pendants featuring the Maltese Cross are available at the Grand Hotel Excelsior’s Gift Shops.