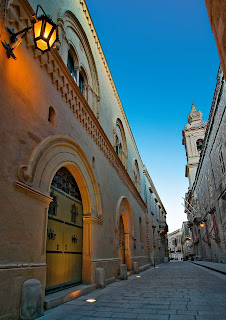 Mdina is one of the few great architectural treats in Malta that did not result from the activities of the Knights of Malta. The oldest city on the island, going back to prehistoric times, the word Mdina derives from the Arabic word ‘medina’ which means ‘city’. Mdina was fortified in medieval times, but its protection in early times must have been its high location on a rocky crag. It is certain that either during the Byzantine or during the Arab occupation of Malta, the fortifications were retracted to the present proportions, perhaps for better defensibility. It is during this time, when the city was referred to as the ‘medina’, that Mdina got its name. The Arab legacy continued even though the Arabs were officially expelled from Malta in 1250 when the Maltese Islands were under Christian rule. Thus the name ‘Mdina’ survived even though the City was referred to as ‘Civitas’ (city in Latin) or ‘Citta Notabile’.
It may be on most postcards and is a must in all the painters’ portfolio, yet the sight of Mdina as you are driving up to Rabat is a view that does not fail to amaze every time. Standing proudly on one of Malta’s highest promontories, the old capital looks like a medieval walled city straight out of a fairy tale. It is an inspiring view; a city that hundreds of years after it was built still commands respect, awe, and curiosity about its tales. And what tales, innumerable and long-winding given the city’s long history. The fortress city, which acted as Malta’s capital city before Valletta was built, once extended to the adjoining town of Rabat. Yet the fortified city was subsequently downsized in order to defend it more effectively.
Once past the deep moat, nowadays a public garden, and inside the city’s walls, cobbled streets are lined with immaculately preserved noble houses, private chapels, palazzi, and cathedrals.
The streets are narrow and winding, and walking along them feels like trying to find your way out of a warren; a feeling which adds to the element of surprise at finding large squares. Silence pervades, and is the perfect accompaniment to a walk on the bastions, and a pause to take in the view of most of Malta stretching out to the sea.
The Grand Hotel Excelsior offers a great opportunity to discover the beauty of Malta & Gozo with Our Executive Chauffeur driven service.
Check Out Our North of Malta Tour:
Price for 2 to 4 persons: 120 Euro, or
Price for 5 to 6 persons: 150 Euro.
Should you wish to experience one of Our Special Malta Tours kindly contact our chauffeur driven service on: +356 2125 0520 or concierge@excelsior.com.mt.