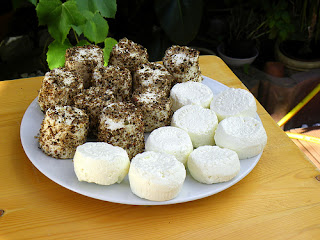 And if you enjoyed reading and trying out Our Head Chef’s Recipe of the Month ‘Fried Goat’s Cheese with Gastic Tomato’ below is a brief information and the making of the traditional cheeselet.
Ġbejna is a round cheeselet made in the Maltese Islands from goat’s or sheep milk, salt and rennet. Virtually all sheep milk and most goat milk produced in Malta is used for the production of these cheeselets, much of it through family-owned cottage industries.
Ġbejna is shaped in a cheese hurdle made of indigenous dried reeds, although now even plastic ones are used. They are traditionally dried in small ventilated rooms, with windows protected by a special mesh mosquito net. It is said that in the past, sea water, rather than rennet, was used as a curdling agent.
It is prepared and served in a variety of forms: fresh, sundried salt cured or peppered. The fresh ‘gbejniet’ have a smooth texture and a milky flavour and are kept in their own way in a similar manner to fresh Mozzarella. The sundried variety have a more definite, nutty almost musky, taste, and are fairly hard. The peppered ones are covered in crushed black pepper and cured, after which they may be stored in oil or pickled in vinegar. Their sharp taste becomes more piquant the more they age and they also develop a crumbly texture.
Try out our mouthwatering dishes at one of our top Malta Restaurants. For more information kindly contact our Food and Beverage Department on food.beverage@excelsior.com.mt