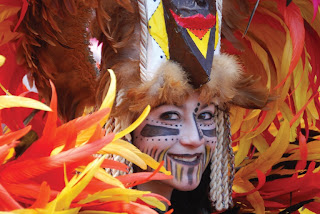 Carnival was introduced to the Maltese Islands by Grand Master Piero de Ponte back in 1535. Held on the week prior to Ash Wednesday, and the approaching 40 days of Lent all rich and tantalizing foods and drink had to be disposed of. The result was a near hedonistic celebration of gluttony and other naughty pleasures, celebrated in the village or town.
The Maltese Karnival also has it’s own unique traditions, among these is the game Kukkanja which was introduced by Grand Master Zondadari in 1721. A crowd assembled in the Palace Square on Carnival Monday and at a given signal attacked the hams, sausages and live animals tied to the long beams fixed against the guard house and covered over with branches of trees in leaf. The provisions became the property of those who, having seized them, were able to carry off the items.
These traditions unfortunately have been lost in Malta, however one can still see the Kukkanja in Gozo’s villages. The nobility would obviously refrain from such rustic endeveavours, preferring a more subtle approach in the form of Carnival balls.
Official Celebrations open with the Parata, an ancient sword dance commemorating Malta’s victory over the Turks in 1565. Nowadays it is mainly children who participate in the dance. The Parata is of special significance in the history of the Maltese Carnival. Under the Knights it was taken very seriously, and the Maltese eagerly awaited its performance because the rule was “no Parata, no Carnival”.
Valletta hosts a number of these parades in costume and colourful floats which normally follow a particular theme, among these the Carnival King. These parades are judged and prizes are given for best dances, costumes and floats. During the 20s and 30s these parades would portray caricatures of the leading political figures which led to some tense situations. The colonial governors outlawing this form of satire of which has never been expressed since.
In Gozo parades also take place at Victoria (Rabat). However the attraction to many Maltese and tourists is the spontaneous Carnival held in Nadur, where costumes take a more personal theme, and show the Gozitan spirit to distinguish themselves from the rest.

Several Carnival Activities are centered in and around Valletta. If you would like to experience the Maltese Carnival Celebrations stay at one of the top Malta Hotels which is located on the doorstep of Valletta and enjoy superior Malta Accommodation.