Day 1 – More to Malta
The tiny island of Malta, adrift in the Mediterranean like a stepping stone between Italy and Africa, has been forced to endure many injustices in its 7,000-year history – a five-month siege by Ottoman Turks, irreparable looting by Napoleon’s garrisons and 154 days of Luftwaffe bombing to name but a few. Yet, in its own way, the current affront to Malta causes equal indignation.
I am talking, of course, of the island’s reputation as a mere bucket-and-spade, fly-and-flop package destination, with little more to offer than jam-packed dive sites and beaches crowded with leathery pensioners.
It is time to explode this myth and send it scurrying for cover like the returning French football team.
Malta is in fact the perfect destination for anyone with a penchant for history, culture, stand-and-stare architecture, gin-clear water and meals that revolve around the fishermen’s catch. And if you want that wrapped in a fabulous climate then you’ll find that too – April to October sees little but sunshine, usually tempered by a cooling sea breeze.
Better still, it’s just a three-hour flight from the UK. Easyjet, Ryanair and BMI Baby all fly the route, though the national flag carrier, Air Malta, offers the more civilised flight times, operating out of Heathrow, Gatwick, Birmingham, Manchester and, in summer, Glasgow.
Transfers? Hardly an issue. The only airport is less than 45 minutes’ drive from anywhere on the island, and is just 8 km from Valletta, Malta’s Lilliputian capital (at barely a kilometre long and only 600 m wide, it may well be Europe’s smallest). 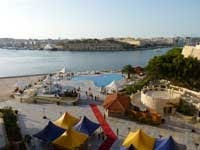